How do you react when someone insults you? According to Zodiac Sign 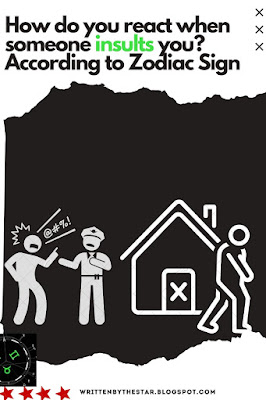 How do you react when someone insults you? Do you immediately retaliate and say something equally as insulting back, or do you internalize it and come up with a burn hours later? We all have our own way of dealing with insults, cuts, burns, or shade.
But when it comes to

How the zodiac signs respond to insults,...
since much of our personality and behavior is influenced by astrology,it’s not surprising that each individual under the same sign would have similar ways in which they reacted to being insulted.

When insulted, an Aries individual will go into attack mode and will confront the insulter. Aries aren't a sign to sit back and just take it — they're going to react one way or another.
Sometimes they might give an equally as painful insult back or they may do something physical. It's really not a good idea to insult an Aries unless you want to get into a fight.

It takes a lot to get a Taurus to react, so if it's just an average kind of insult, they probably will barely acknowledge it. However, if it's an insult of epic proportions, Taurus will react in a big way and they won't let the issue drop until they're satisfied.
Here's the thing: Taurus can hang on to that insult and turn it into a grudge, holding on to it until they're satisfied that the insulter has learned their lesson. It's best to be kind and complimentary to this zodiac sign.

When Gemini is insulted, they will usually decide that it's not worth their time and energy to respond and will walk away. Gemini doesn't want to get into a war of words with someone who is clearly clueless regarding Gemini's many talents and skills, especially their intelligence.

When a Cancer is insulted, they will take it very personally and analyze it for hours. They'll start out hurt, but over time will become angry and will think of ways to hurt the person that insulted them.
Luckily, Cancers will only think those dark deeds and won't act on them. However, if that insult is big, Cancer won't forget it for a very long time and it will affect their behavior.

When insulted, Leos will laugh it off and then make the person who insulted them the butt of a joke. Some lame insult isn't going to affect Leo's confidence or their emotions.
If they have to deal with the person who insulted them at their job or another group, Leo will look at the big picture. They will continue to work with them, but that doesn't mean they will enjoy it.

When Virgo is insulted, they won't believe it at first. Then, after it registers, Virgo will say something so critical that the tables will be turned, and the insulter will feel the burn.
It's not a good idea to insult someone who is so intelligent that they can dance circles around you when it comes to insults, cuts, and burns.

When a Libra is insulted, they'll internalize it and get mad later. They will go through the number of things they should have said, and they'll be angry at not standing up for themselves.
In the end, Libra will either wait for an opportunity to get the person who insulted them back, or they'll let it go, knowing that holding onto that kind of negativity doesn't do any good.

When Scorpio is insulted, watch out. They're much more sensitive than they appear and if they're hurt by someone's words, especially if they're not true, Scorpio is going to get mad and they're going to get even.
If someone makes the mistake of insulting them, Scorpio will want them to learn the lesson that they must never do it again.

When Sagittarius is insulted, they will try to change the insult into an abstract idea rather than a specific insult against them. They reinterpret it so that it doesn't hurt or affect them in any way.
Sagittarians don't have the emotional wherewithal to let anything somebody says affect them. If things feel awkward, then they will just leave; they're not going to get into a fight about it if they can avoid it.

When a Capricorn is insulted, they'll just roll their eyes and ignore the person. They long ago accepted the fact that not everybody likes or appreciates them.
Capricorn will feel sorry for the person who insults them because anyone can see that they're broken if they feel the need to insult someone to feel better about themselves.

When an Aquarius is insulted, they will get up on their high horse. They will look at the person as someone inferior and convey to them that they don't give a crap about their opinion and would prefer them to just run along.
One of the go-to behaviors of Aquarius is to detach, and that's what they're going to do if someone insults them.

When Pisces is insulted, they get hurt, but the last thing they want is to let the person who insulted them know they hurt them. But by trying to hide their emotions, it only intensifies them.
It's hard for Pisces individuals to disengage and brush off an insult, even if they try to do just that.